Claude Hopper, a kangaroo, and “best darn hopper in the world,” is full of himself (and dumb), so a couple of Scottish rabbits take him on. They set up a boxing ring; Claude gets tangled in the ropes. Next, he tries a distance leap, but the rabbits ride on his tail, then leap over as he lands. He tries again, without all the ballast in his pouch, but they’ve stuck his tail down with chewing gum. Claude falls into the river; the rabbits wash up in his water-filled pouch. Now they start coaching him. First, he’s launched from a see-saw, bouncing off a zeppelin and right through the meat price ceiling; he lights a match to find out where he is and attracts anti-aircraft fire. The rabbits had given him a case of dynamite as “ballast”; he pulls it out, and falls — on Tokyo. “Guess we know who’s champeen now.”

Confusions of a Nutzy Spy

Bugs Bunny’s Bustin’ Out All Over

Bugs and Daffy’s Carnival of the Animals 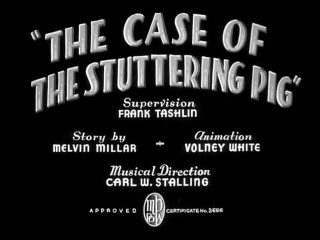 The Case of the Stuttering Pig